Learn how to use a model to evaluate battery pack safety during thermal runaway events.

Designers of battery packs are tasked with a very challenging problem: to package a set of cells as tightly as possible and minimize the amount of non-cell weight in the battery while maintaining proper temperature levels of cells, protecting against premature cell degradation, and ensuring safe operation.  The last item on the list is, of course, the most important: ensuring that the battery pack is safe under any circumstance.

The most common challenge to ensuring battery safety is thermal runaway.  Thermal runaway is a phenomenon that occasionally occurs in Lithium-ion (Li-ion) cells when extreme temperatures are reached.  During thermal runaway, undesired exothermic side reactions heat up the cell, and as the cell heats up, the rate at which the undesired reactions occur accelerates, eventually causing a catastrophic loop of events that concludes with a destroyed Li-ion cell and a lot of heat released.  This loop of events is summarized in the image below. 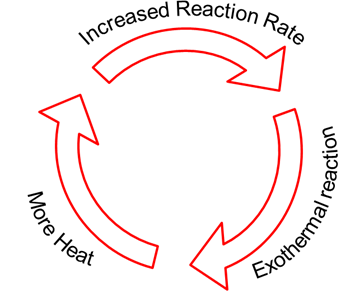 With all these potential causes for thermal runaway, as a pack designer, how are you supposed to protect your cells from entering thermal runaway?  The unfortunate answer: you can’t.

Thermal Runaway Propagation is the key phenomenon to consider when designing a safe battery pack, this refers to the event of a single cell entering thermal runaway, releasing a large quantity of heat, and heating neighboring cells to the point of thermal runaway, essentially starting a chain reaction in which all cells in a battery pack are eventually destroyed.

Testing the design of a battery pack against thermal runaway propagation is an expensive and dangerous endeavor.  First, expensive prototype versions of battery packs must be assembled, then a single cell is selected (either at random or with engineering discretion to determine which would be most likely to cause the undesired chain reaction), and finally thermal runaway is intentionally induced on the selected cell (either with a nail or by heating it to extreme temperatures).  After that, it is up to the design of the pack to determine whether or not neighboring cells enter thermal runaway, and if they do, how fast.

This experimental setup has two major downsides.  First, battery packs are expensive, and prototype versions of battery packs are even more expensive.  To build these and intentionally destroy them can result in a high cost for battery safety testing.  Second, this physical test is often done very late in the development cycle for the battery-powered product (e.g battery electric vehicle, EVTOL, electric bicycle).  If a battery pack fails this test, it can be a major setback for the release schedule of the product, which can be detrimental to businesses.

Using simulation to run virtual thermal runaway propagation tests for Li-ion battery packs is a great way to avoid the costs and risks associated with experimental testing.  In addition to that, single cells do not need to be picked out at random.  Instead, multiple tests can be setup testing the “what if” scenario for every cell in a battery pack.

To take this electrothermal battery model and setup the thermal runaway propagation model, a few extra steps were required.

NASA has created specialized bomb calorimeters that impose thermal runaway on a single cell through a variety of causes (internal short, nail penetration, excessive heating).  With this type of cell-level testing, NASA was able to measure the amount of energy released during a thermal runaway event.  Some example results from their testing of cylindrical cells are shown below. 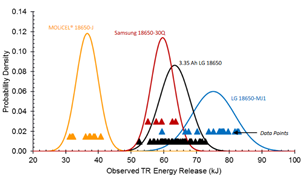 The nominal battery model that was setup for the previous electrothermal model was upgraded to include a model of thermal runaway.  This included the following changes:

Once these alterations were made to the battery model, any cell in the module can be selected as the “trigger” cell by applying an external heat until the trigger temperature of 180°C is reached.

In the first study, a cell in the corner of the module was selected to be the trigger cell.  It was artificially heated to its runaway temperature of 180°C and it immediately entered thermal runaway.  The animation below shows the results of the thermal runaway simulation with the corner cell (top of the image) selected as the trigger cell.  Once again, blue cells are relatively cool and red cells are hot.  From viewing the animation, we can see that the corner cell does not cause a chain reaction of neighboring cells entering thermal runaway.

The virtual thermal runaway propagation tests shown above both show “passing” results.  The trigger cell self-heats to extremely high temperatures; however, the neighboring cells do not pass the 180°C threshold to enter thermal runaway.

In order to illustrate a “failing” test result, some changes were made to the module to make it more likely to propagate thermal runaway to neighboring cells.  The busbar in the module was included, which increased the amount of heat conducted between neighboring cells.  Additionally, the ratio of self-heat and heat released as ejecta was altered to be 30%-70% instead of the 40%-60% previously mentioned.

With these changes, the following results were observed.  In this case, the trigger cell very quickly causes a chain reaction among neighboring cells and causes a much more catastrophic event than the previous two test cases presented.

In the examples given above, the CAD geometry was converted into a GT model using GT’s built-in CAD geometry pre-processing tool GEM3D and models were further setup using GT’s integrated simulation environment in roughly half of a day.

In the examples given above, the models run roughly 2-4 times faster than real-time on a laptop PC, resulting in a 30-minute simulation taking 7-15 minutes to run.  The finite element structure in this model consisted of 6,000 nodes and 13,000 elements.

This fast time-to run enables users to experiment with some of the uncertainty that comes with battery thermal runaway propagation.  Which cell initiates thermal runaway? How much heat does it release?  How is that heat released?  How much material is ejected from it?  All of these are sources of variability that can be explored with the help of fast-running models (look for a future blog on this specific topic!).  This type of variability analysis would not be possible when using extremely detailed 3D CFD models.