Most people are aware of the dramatic and fast-paced trend towards electrification within the automotive industry which has led to the increased use of Lithium-ion (Li-ion) batteries for energy storage in electrified vehicles. Here at Gamma Technologies, we work with many modeling, simulation, and controls engineers in the automotive industry, and one thing I have noticed is that this trend towards electrification is not only a shift in the products that OEMs sell, but also a personal shift for many automotive engineers. I’ve spoken to many engineers who have historically worked on conventional vehicles and are now being asked to focus more on electrified vehicles. Because of this, I decided to write a blog introducing the basics of Li-ion technology and popular modeling techniques for these automotive engineers trying to keep up with this major trend in the industry.

There are many ways to model a battery, but the two most commonly-used are electrical-equivalent behavioral models and electrochemical physical models. Both methods provide value for engineers, and each one takes a different approach to modeling the behavior of batteries. In this blog, you’ll learn about the basic operation of Li-ion batteries, how these different approaches model the behavior of a battery, and the benefits and tradeoffs associated with each.

How exactly does a Li-ion battery work?

Before I go into detail about different modeling methods, let’s make sure we understand how a Li-ion battery operates. Figure 1 shows a cross-sectional view of a Li-ion cell. 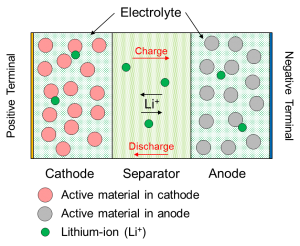 Shown on the left and right sides of this cross-sectional view, the positive and negative terminals allow electrical connections between them.  This is where battery or cell voltage can be measured. During charging and discharging, Li-ions (Li+) shuttle back and forth between the cathode and anode through the separator (from the cathode to anode while charging, and from the anode to cathode while discharging). Within the cathode and anode, Li+ reacts with the active materials, releasing or absorbing electrons in the process that are then able to flow between positive and negative terminals.

What’s Important in a Battery Model?

For most applications using battery models, it is generally important to accurately predict the electrical characteristics of the battery, including the voltage across it and the current flowing through it. Additionally, an estimation of State of Charge (SOC, a normalized estimation of how much chemical energy is stored in a cell) is required. If battery models are linked to thermal management simulations, accurate heat dissipation from the battery must be captured.

As anyone with a cell phone, tablet, or laptop can tell you – Li-ion batteries degrade over time. There are many electrochemical factors that lead to the degradation of a Li-ion battery.  For instance, the active materials in the cathode and anode tend to crack over time and there are undesirable side reactions that lead to growth of films on active material particles in both the cathode and anode.  Additionally, under extreme conditions, Li+ may react with electrons to form Lithium metal in the anode during a process referred to as Lithium plating, which can be very detrimental to the health of a battery.

Safety simulation and testing is also an important topic. Abuse conditions such as nail penetration, as well as extremely hot or cold environments could be catastrophic for the battery. This is where predictive 3D models of cells and the conditions around them are required in order to capture the electrothermal response of the battery.

Now that we understand more about Li-ion batteries, let’s take a look at the different modeling methods used, starting with electrical-equivalent modeling.  This modeling method is done primarily to give electrical representations of how batteries react under certain loading conditions.

The simplest test done on a battery or cell is a constant-current discharge/charge test, where cells are discharged and charged to and from 0% and 100% state of charge at a constant current.  During these tests, the terminal voltage of the battery is observed to be similar to Figure 2.

The behavior observed here is that the voltage changes while the battery depletes depending on the direction of the voltage and the current.  Additionally, the terminal voltage drops with increasing currents.

With electrical-equivalent modeling, this type of behavior is represented in an electrical circuit using the resistive battery model, pictured in Figure 4.  In this model, the open circuit voltage and internal resistance are often characterized as functions of temperature and state of charge.  Using this model, the behavior observed in constant-current charge and discharge cycles can be replicated quite accurately.

The resistive models are good representations of a battery’s electrical behavior observed in steady-state conditions; however, if loads on a battery are more dynamic, the resistive model may not follow observed behavior.  For instance, when Li-ion batteries are loaded with pulses of current, the voltage response can be very non-linear.  Figure 5, below, shows how a typical Li-ion cell reacts to a pulse of discharge current and a pulse of charge current. 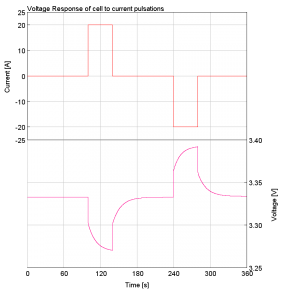 With a resistive electrical-equivalent model, the non-linear, exponential-decay portion of the voltage response would not be captured.  In order to be able to capture the exponential decay behavior in the voltage response, one or multiple resistor-capacitor (RC) branches can be included in the electrical-equivalent model.  See Figure 6 for a circuit diagram of such a battery model, often referred to as a Thevenin battery model.

With this type of model, the step changes in the voltage captured are represented with the internal ohmic resistance (R0) and the exponential decay of the voltage response is captured with the RC branches.

In each of these electrical-equivalent models, there are a few ways to estimate SOC of a cell or battery.  The simplest and most common way is a process called “Coulomb Counting” where the model counts the charge (integral of current over time) moving across the battery and very simply adds or subtracts that charge from the initial charge of the battery.

With these electrical-equivalent models, heat generation of the battery is calculated by the summation of the power losses across each resistor (I2R losses).  Aging phenomena of Li-ion cells are often characterized as capacity fade and resistance growth over time with non-physics based empirical models.

It’s important to note that electrical-equivalent battery modeling is not inherently a physics-based approach. Both the dynamic and non-dynamic approaches are electrical representations of how the terminal voltage of a battery may react to different battery loads. The capacitors and resistors are not meant to represent physical capacitances and resistances but the dynamics of the battery.

The circuit parameters are often characterized at multiple temperatures and states of charge by matching experimental results.  This means that electrical-equivalent models are not predictive outside of calibrated temperature or SOC range.

If this predictive capability outside of calibrated temperatures and states of charge, or if insight into cell operation is desired, physics-based electrochemical models are available to model Li-ion batteries.  For Li-ion batteries, the widely accepted electrochemical modeling approach is often referred to as the “Newman Pseudo 2D model,” named after John Newman, the creator of this model. 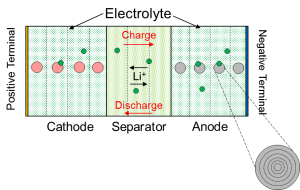 In these electrochemical battery models, the concentration of Li+ in different parts of the cell is solved, ultimately leading to a physics-based estimation of state of charge.  These models are also able to predict the heat generated from Li-ion batteries, including heat generated ohmic losses, reaction losses, and entropic heating.

With electrochemical models, physics-based representations of aging mechanisms are used. For instance, the SEI layer, cathodic film layer, and their growth over time can be modeled. Additionally, Lithium plating and Li+ isolation due to active material cracking can also be modeled.

These physics-based aging models have many benefits, including:

How Do These Methods Compare?

Now that we have an understanding of how each method works, let’s compare the two to understand the advantages and tradeoffs associated with each.

Next – electrochemical models. Unlike electrical-equivalent models, electrochemical models give insight into what occurs inside the cell and they can be used outside the calibrated temperature range. Another key difference is the ability to use physics-based (as opposed to empirical) aging models, which give insight into growth rate of the SEI and cathodic film layers, material isolation due to cracking, and Lithium plating. These models also give cell designers the ability to quickly iterate on cell design parameters without having to re-calibrate an electrical-equivalent model.

I know that’s a lot of information, so some advantages of each modeling approach are summarized in Figure 8.

Figure 8 – advantages of each modeling approach

As you can see, both modeling methods offer their own unique set of advantages and tradeoffs, but it still may not be clear when electrical-equivalent models and electrochemical models should be used.

Electrochemical models are often used in more advanced applications of battery modeling. For instance, if a model needs to predict the aging of a Li-ion cell, physics-based aging models offer a more flexible and predictive solution than the empirical aging models available in electrical-equivalent models.  Additionally, when designing a cell, choosing a charging strategy, or studying battery behavior in extreme climates, electrical-equivalent models may not provide enough insight into the behavior of the cell, which is often required for these applications.

Because both the electrical-equivalent and the electrochemical approaches to modeling Li-ion batteries provide value to simulation engineers, Gamma Technologies offers accurate capabilities for both methods.  When electrical-equivalent models are required, engineers are able to use GT-SUITE’s flexible solution for a resistive or Thevenin (flexible number of R-C branches) battery model. When electrochemical models are required, AutoLion provides cell designers and system simulation engineers accurate and fast-running electrochemical models.  These two tools can also be combined in order to incorporate electrochemical battery models into multi-domain system-level models. 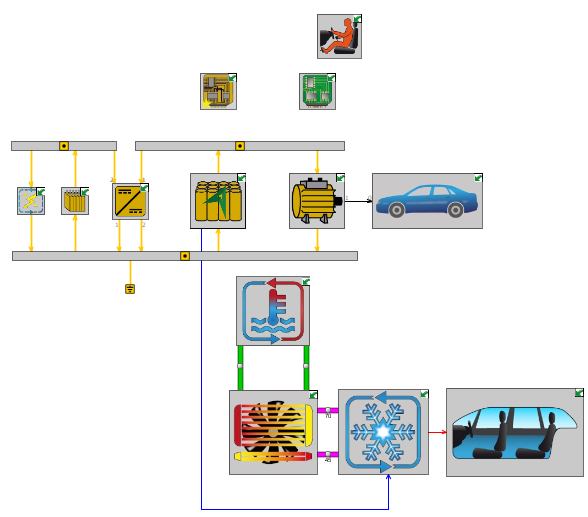 I know that this was a long read, but I hope this blog helped make Li-ion batteries feel less like “black magic” and that it built up an understanding of both electrical-equivalent and electrochemical modeling approaches to them.

NOTE: This piece was originally published on July 2018