GT-SUITE is the ideal modeling platform for carrying out controls system modeling in Model in the Loop (MiL), Software in the Loop (SiL), and Hardware in the Loop (HiL) environments.  GT-SUITE is supplied as a Simulink S-function, and the GT models are easily integrated into Simulink control system models for desktop simulation.  GT-SUITE supports both master and slave forms of interoperability with controls modeling tools, thus allowing GT models to be exported and run within a master controls modeling tool (Simulink, for instance), or for the controls tool model to be exported as a DLL (or FMU) and run directly within GT-SUITE.  For moving to HiL based environments, GT models are quickly and semi-automatically converted to real time capable fast running or reduced order models (FRM, ROM), and ported to popular HiL systems, including those from dSpace, ETAS, NI, and others.

To run physical, predictive engine models on a HiL system, GT offers GT-POWER-xRT, a solution dedicated to the current and future requirements of high-speed ECUs. Using the same governing equations as GT-POWER, GT-POWER-xRT has been tailored specifically for the needs of ECU calibration and testing, providing unparalleled execution speed, thus allowing for increased model complexity on the test bench. Advanced control strategies, such as combustion control, can now be tested with a detailed physical engine model at significantly faster computation speeds with minimum effort and maximum accuracy, predictiveness, and fidelity 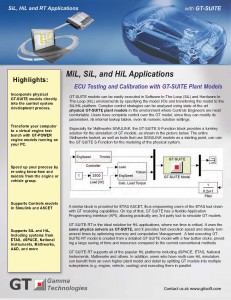