The 2015 GT User Conferences were the most successful and most highly attended conferences we have ever had the pleasure of hosting. This past year, GT hosted eight user conferences around the world, including events in Italy and France in the spring (140 attendees), Frankfurt on Oct. 26-27 (390 attendees), Detroit area on Nov. 9-10 (290 attendees), Japan, Korea, and China on Nov. 18-23 (420 attendees, hosted by IDAJ), and India on Dec. 7-8 (120 attendees, co-hosted by GT and ESI-Mindware). We are so very thankful to the nearly 1400 engineers who attended these events, and especially appreciate the approximately 90 presenters from major OEMs and Tier 1 suppliers who presented their groundbreaking work for all attendees to enjoy. While not practical to list out every organization that did present, below is a small sampling of some of the OEM’s, Tier 1’s, and consultants who contributed presentations to this year’s events. 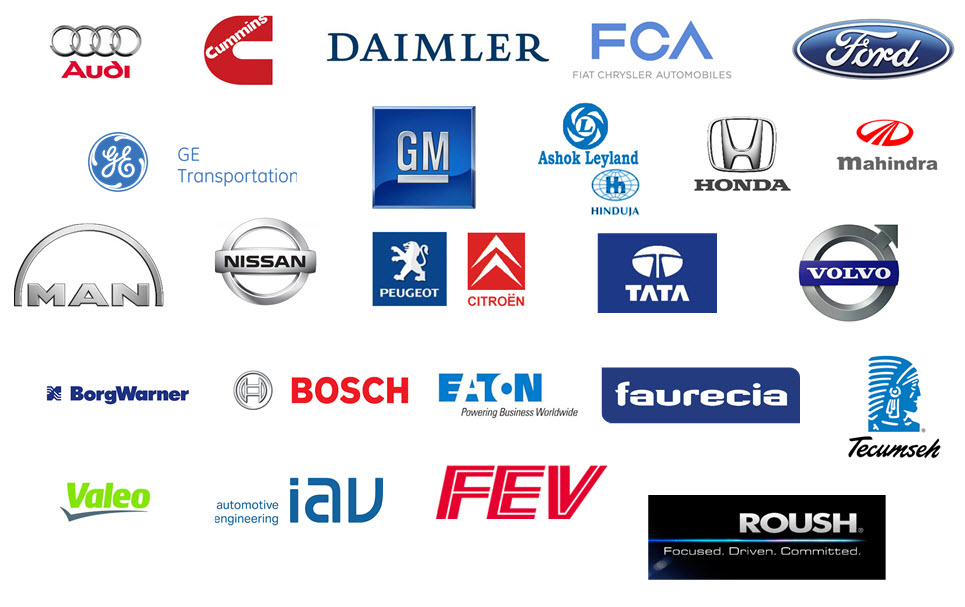 Below we provide a short update on the fall conferences hosted by GT, including Frankfurt, Detroit, and India.

European Conference:
The 2015 GT-SUITE European Conference was held on October 26-27, 2015, at the Steigenberger Airport Hotel in Frankfurt, Germany. At this year’s event, there were 390 attendees, representing every major OEM within Europe as well as some from Asia and the U.S.

A big part of the excitement around this year’s conference was based on an expanded split session format that provided four parallel tracks during the morning and afternoon split sessions. With three presentations in each session, this provided the attendee the opportunity to view any of 24 different presentations on eight different topics. The split session topics included Combustion, Exhaust, Fuel Consumption, VTM, Turbocharging, Controls, Hydro-Mechanics, and HVAC. These split sessions were flanked by morning and afternoon joint sessions that focused primarily on integrated simulation and model based system engineering (MBSE) topics, which included contributions from Volvo Cars, Daimler, Audi, GM, Nissan, and Fiat. A few pictures and descriptions from selected presentations are given below. The complete presentations of all presenting company approved presentations can be viewed on our website at: https://www.gtisoft.com/gt-suite/publications/

The morning main session kicked off with a novel application of GT-POWER for geometrically and physically modeling a helical roots type blower, presented by Volvo Cars. This was followed by a presentation on the holistic design of a cam phaser by Daimler, in which the cam phaser model was included in an integrated model which included the crankshaft, oil pump, oil circuit, valvetrain, and of course, the cam phaser, with all subsystems modeled entirely in GT. The morning joint session concluded with a presentation on specification and analysis of a turbocharged gasoline engine for a hybrid powertrain, presented by Audi.

During lunch and the intermediate breaks, demonstrations were given in a dedicated room, in which GT presented many of the new features of GT-SUITE V2016. There were again many GT demo booths in the break room this year, covering such topics as vehicle thermal management, cabin modeling, combustion, aftertreatment, advanced valvetrain modeling, vehicle and transmission, Fast Running Models (FRM’s) on SiL/HiL, injection and lubrication modeling, and acoustics modeling. Special thanks to our technical partners from TAITherm (RadTherm cabin modeling), ROMAX (transmission modeling), and Bosch Engineering (electric vehicle) for their contributions to this year’s demo stations. 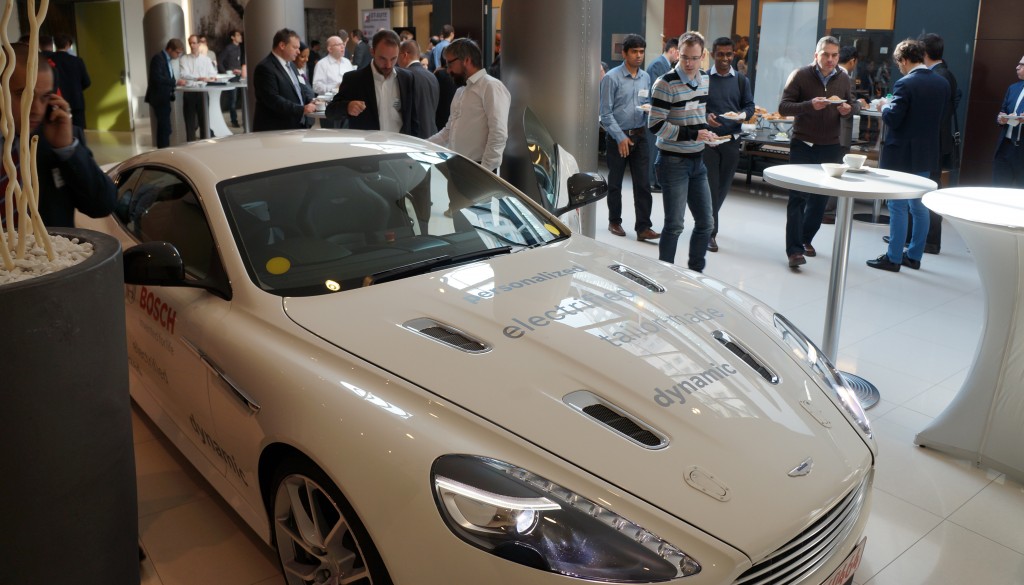 At the end of the long conference day, most attendees joined us for what has now become an established tradition; the post-conference beer break and attendee dinner and social event. This provided a fun and relaxing time for all to unwind following the conference activities, and a chance for old friends to reconnect, as well as a nice opportunity to establish new friendships. At this year’s dinner, to “celebrate” 21 years of GT, a Blackjack (21) and gambling theme party was held, which made for a nice introduction to this classic gambling game that many of our European friends had never experienced. 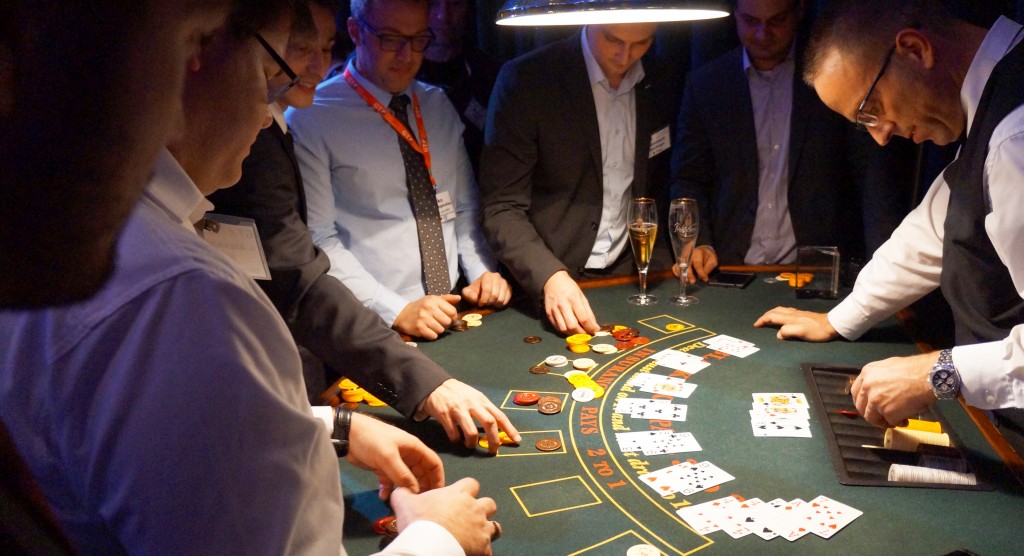 On the days following the User Conference, GT conducted over 20 training and seminar events, which were attended by over 200 conference attendees. This year’s seminars were broken into half day events, with different topics in the morning and afternoon, to allow the attendees an opportunity to get a broader overview of multiple topics.

Thanks again to all attendees, and especially to the presenters, at this year’s conference. We are looking forward to seeing you again next year. The conference dates are already set for October 17-18, 2016, at the Steigenberger Frankfurt Airport Hotel.

U.S. Conference:
The U.S. GT-SUITE User Conference was held on November 9-10, and this year marked two firsts for the event. The conference venue moved from its old home at the Townsend Hotel, to the Inn at St. Johns, which was able to accommodate the large crowd that the Townsend could no longer handle. Also, this year the format of the conference also moved to a split session format, much like we have used in Frankfurt for many years, to accommodate the increased number of presentation offerings from the GT user community. This year’s record crowd of over 290 attendees enjoyed 18 quality presentations from Cummins, Eaton, FEV, Fiat-Chrysler, Ford, GM, Roush, Pratt+Miller, Prometheus, SWRI, TARDEC, VKA/RWTH, U. of Michigan, and U. of Wisconsin.

The conference presentations were given in two joint sessions; one early morning, and one late afternoon session, along with two split sessions; one each powertrain and vehicle sessions in the late morning and early afternoon.

The early morning joint session started off with a novel application of GT-SUITE to a two-phase cryogenic propulsion system for an aerospace application, and was followed by back to back presentations from engineers from Fiat-Chrysler describing the application of GT-SUITE to valvetrain and oil circuit systems, including full engine friction assessment. A few pictures from some of the split session presentations are presented below, and you may view all approved presentations from our website at https://www.gtisoft.com/gt-suite/publications/. 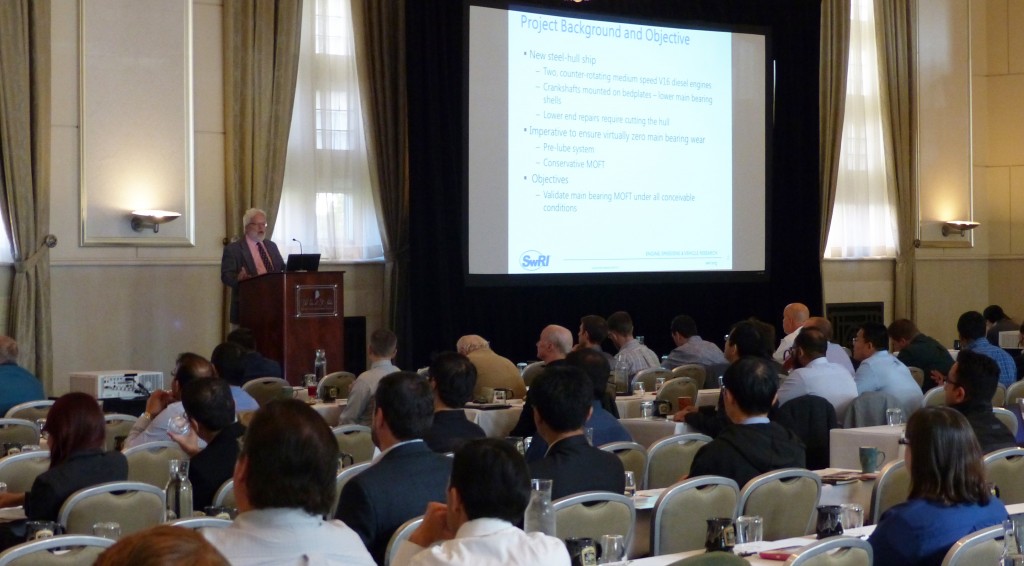 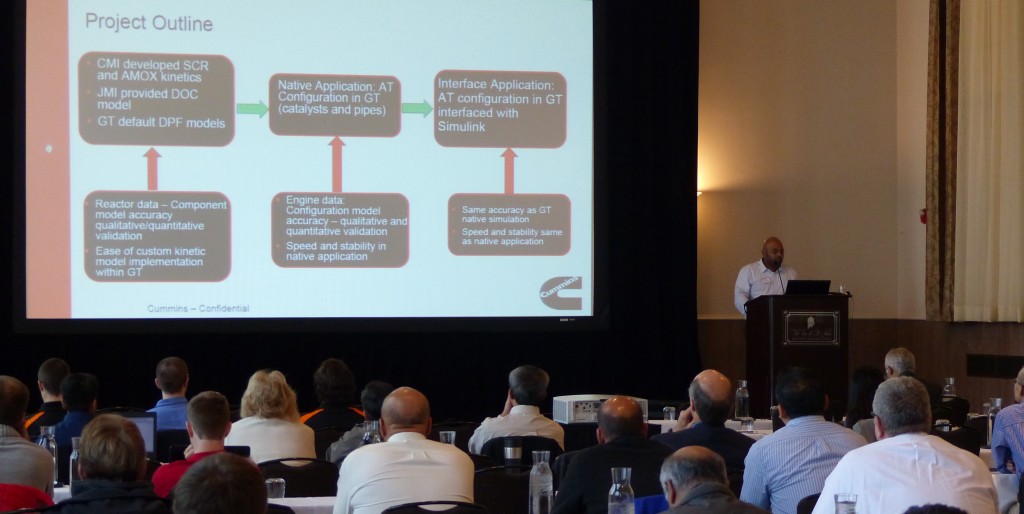 We would like to give a special thanks to our good friends Gerry Clark from GM and Ethan Bayer from FCA, who were kind enough to bring examples of their amazing performance vehicles, the Cadillac ATS-V and Dodge Hellcat Challenger, for all attendees to admire during the breaks.

India Conference:
GT and ESI-Mindware hosted the 3rd annual GT-SUITE User Conference in Pune, India on December 7-8. The conference was a great success, with 140 attendees from a wide variety of Indian organizations (another record attendance!). Special thanks to Dr. Jindal, VP of Tata Motors, for his insightful keynote speech. 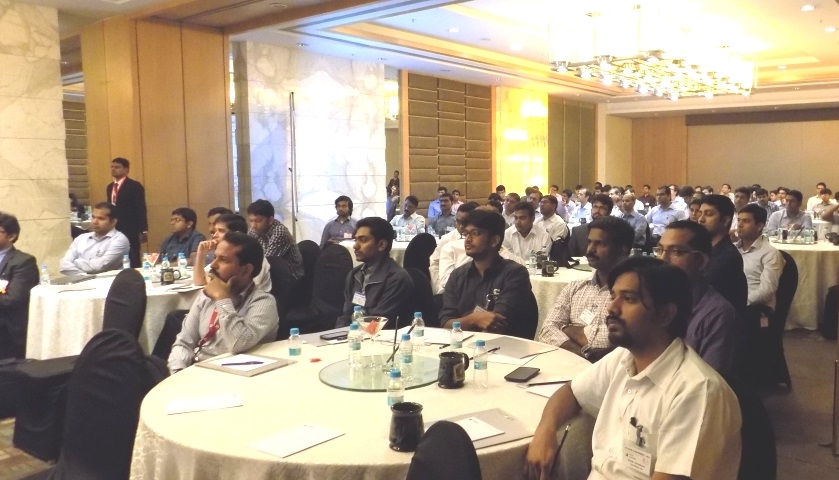 Attendees at the GT India Conference 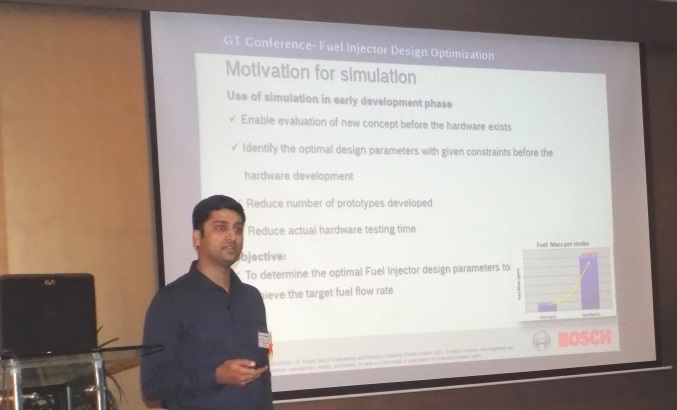 We pass along our many thanks to the presenters at the India conference, as well as to our partners at ESI-Mindware who did such a great job organizing the event and taking care of the GT staff during their visit to India.

European, U.S., and India Presentations:
Approved (by the presenting company) presentations from the conference can be found on our knowledge base web page, https://www.gtisoft.com/gt-suite/publications/. To search for this year’s conference presentations, simply filter for year 2015 and source GT-SUITE Conference Presentations.

Thanks again to all who presented and all who attended. We are excited by the prospect of seeing you and more of your colleagues at next year’s events.