Stricter demands on emission norms, fuel economy and performance require internal combustion engines to be optimized with respect to their frictional losses and wear. Different investigations show that the piston group, consisting of piston skirt and rings, cylinder liner and conrod bearings, contributes a major part to the overall frictional losses. Although the ICE exists for over a century now and many improvements have been made, its efficiency can still be increased and simulation tools like GT-SUITE have become a major contributor to achieve these targets. This blog illustrates the workflow how a predictive friction model for the piston group assembly can be set up in detail using GT-SUITE and how the results correlate with measurements. The built-in design optimizer and DOE tool (design of experiments) can be used to minimize frictional losses, while ensuring lubrication of all involved parts.

The outlined approach enables not only solving common problems for conventional vehicles like improving warmup strategies to stay within emission limits and reducing fuel and oil consumption. But especially also rather new effects introduced by the increasing amount of electrified powertrains are captured. Just to name a few, questions like how do measures like stop-start and pure electric drive over longer distances impact engine friction, can be answered.

The GT-SUITE software package offers a CAD driven process to obtain a model based on the 3D-CAD geometry of the system. All geometric and mass properties will be automatically transferred to the model after assigning the corresponding material (Fig. 1). 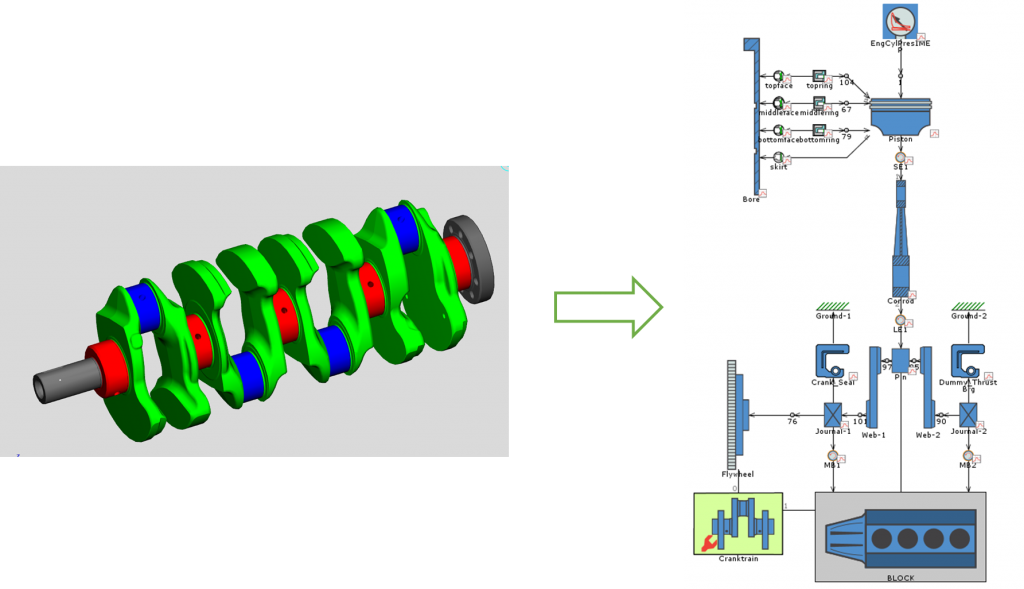 Based on this exported standard Cranktrain model, that can be used for various investigations from rigid balancing up to torsional damper modeling, the focus in the next sections will be put on some friction relevant parts and how GT-SUITE takes into account their properties:

The piston ring objects are used to represent each of the individual rings in the ring pack. Detailed modeling involves calculation of ring radial and twist motions under the influence of ring tension, land pressure and countered by hydrodynamic and asperity forces at the ring running face. The piston rings can be incorporated into a more comprehensive blowby model with GT-POWER to evaluate sealing effectiveness and crankcase ventilation. In the context of predicting friction, these physics are simplified and instead the cylinder pressure is applied as the boundary condition for the compression ring groove and is scaled and applied to the scraper ring using our suggested values. This level of model fidelity can accurately predict the friction physics and its effect on the Cranktrain torque.  The shape of the piston ring can be represented by various geometric approaches. These are shown in Fig. 2 with symmetric profiles for the top (cylinder side) and bottom (crankcase side) section.

In case the actual ring shape differs from the ones shown above, GT offers full flexibility in allowing a user defined profile. The necessary inputs will be concluded by specifying material and mass properties as well as the surface texture and roughness.

Another main contributor to the friction is the piston skirt to cylinder wall interface. In order to consider the piston secondary motion (lateral motion and tilting effects), the skirt profile will be described in terms of axial and ovality profiles (Fig. 3). Also thermal deformation can be considered. 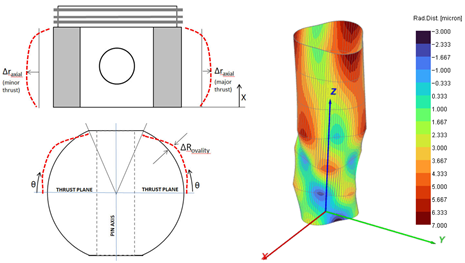 The other side of the interface is determined by the cylinder wall. The calculated clearances to allow ideal piston motion inside the cylinder can be considered as a function of circumferential angle and axial position. Furthermore, the deformed shape of the bore resulting from thermal expansion and mechanical bolt clamping loads can be included (Fig. 3). This information, together with the surface roughness, are used to determine the ring face and skirt oil film viscosity and ring-bore conformance, both of which affect oil film and friction calculations.

This brings us to the Lubricant that needs to be defined for this calculation. GT-SUITE offers a wide range of different oils available in the standard library that ships with the installation. If the user does not find a specific lubricant, it’s easy to define it as a new reference object in the model. The tribology models in GT-SUITE consider viscosity as a function of temperature, pressure, and shear rate to properly characterize the wide variety of oil blends used in industry.

Oil film temperature is calculated by averaging the piston skirt temperature (assumed to be uniform), and a bore temperature profile as a function of axial position.

Non-Newtonian shear thinning can be modelled by a variety of Carreau-like methods, all of which follow the Power Law.  After providing GT-SUITE with viscosity data as a function of temperature and shear strain rate, GT-SUITE will fit high-shear viscosity , characteristic time , and power law exponents m/p.  The former two are physically-based functions of temperature.

Pressure dependence can be defined explicitly via viscosity vs pressure/temperature maps, or use of Barus or Roelands exponents.

At runtime, thinning and pressure effects are applied on-the-fly using the average shear rate and film pressure.  Averaging is performed using a geometric mean for each pad, and lookups are performed at each timestep.

Shown below are classical Stribeck curves for the piston group, shown for 3 oil weights in a typical cranking scenario – adiabatic cylinder, no firing.  In general, increasing viscosity allows the surfaces to escape asperity load (transition from mixed to hydrodynamic lubrication) more easily, but carries a penalty of increased hydrodynamic shear friction.

Since the surface finish is another important influencing factor on the oil film extension and therefore on the friction behavior, the user can choose from different ways to define the asperity mesh. Next to pre-defined surfaces in the GT library and the possibility to enter measured profilometer data, that GT-SUITE uses to extract the corresponding parameters to characterize the surface, a new feature also allows the possibility to investigate different patterns and investigate their influence on the oil film extension. A demonstration of such a pattern for the piston skirt axial profile can be seen in Fig. 6.

Figure 6: Possible surface patterns and their influence on the piston skirt friction force

Last, but not least, the cylinder pressure curves should be defined for an accurate prediction. The common approach is to either use measured profiles or generate these using an engine performance model (integration of GT-POWER model with predictive friction model).

The standard procedure to perform this simulation is to run multiple steady-state simulations for the whole engine operating speed range, increasing the engine speed from idle in small increments to maximum speed. The runtime for these models usually is in a range of minutes, which makes them attractive to be used in large DOE’s and/or optimizations.

GT-SUITE’s post-processing tool GT-POST allows to analyze and customize the simulation results in every way. Summarizing plots, like the stacked plot below, can be visualized as well as individual component friction losses. In Fig. 5, the contribution of individual combine to provide the overall friction for the entire engine speed range and is compared to measured strip down test data. The contribution of the piston-cylinder (ring and skirt) is dominating for most operational points and emphasizes the importance of investigating this interface in more detail. 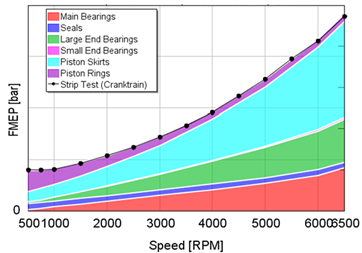 Fig. 5 shows the friction force for a top ring at different engine speeds and with different cylinder pressures. It can be seen that the GT solution is capable of following the measured floating liner forces in a quite accurate manner. Beside these results, the detailed motion of the piston ring as well as the contact behavior to the cylinder side (hydrodynamic and asperity) can be investigated and further improved, if necessary.

The other major contributor to the overall friction, the piston skirt to cylinder interface power loss, is shown for one engine cycle and a specific steady-state condition (fixed engine speed) in Fig. 6. For this specific layout and operating condition, there is no asperity contact in contact surface. That means that all forces in lateral direction are carried by the oil film which would ensure a sufficient lubricated contact here. Furthermore, the friction power is higher during upstroke than during the downstrokes. The reason can be the piston pin offset in order to abet the downstroke secondary motion behavior that usually causes the higher friction forces.

Figure 9: Piston Skirt to Cylinder Friction Power loss over one complete engine cycle, split into hydrodynamic and asperity as well as major and minor thrust side contribution

Finally, in addition to 2D line plots, there are also several results that can be visualized in 2D and 3D plots or even in animations. Fig. 8 shows one of these animations for the piston skirt to cylinder interface and color contours the fluid film pressure according to its magnitude. This unwrapped view and animation gives the user the possibility to detect any uncommon behavior in the important oil film extension and can give ideas for areas where the design might need to get improved.

Figure 10: Animation of the Piston Skirt to Cylinder Contact Oil Film Pressure during one engine cycle

GT-SUITE offers a complete solution to model the frictional behavior of internal combustion engines. The special features are that the solution is:

Considering this complete solution in the well-known and established, user friendly environment of GT-SUITE, allows the development engineers to meet their targets with simulation, in addition to test engines on test benches.

Preview: The above shown model can be enhanced by compliant piston-liner model to capture flexible effects based on the interacting forces. The same setup can serve as a starting point to investigate oil consumption mechanism like oil evaporation, blowby/blowback and oil throw-off. More information will follow in one of the next blogs. Stay tuned.