Accurate prediction of diesel combustion, performance, and emissions requires that the injected mass and injection rate shape be known to a high degree of accuracy.  Detailed modelling of the injector by OEM’s allows greater flexibility than measurement alone.  It provides injection data for the entire operating range, allows insight in to the injector operation, and enables integrated simulations. In order to make detailed injector modelling more accessible to OEM’s GT has kicked off two separate initiatives.

The first is a partnership with IAV to support OEM’s interested in creating detailed models of any type of injector.  The second is the release of a validated injector model for passenger car applications included in every installation of GT-SUITE.  The model was built by GT using work by Payri et al on a Bosch CRI2-16 injector, published in 2012.

The partnership with IAV has been created to provide OEM’s with a cost-effective solution for obtaining a detailed injector model.  State of the art nondestructive measurement techniques and IAV’s leading injection rate measurement systems allow for model creation from all types of injectors, even from prototypes.  These techniques also reduce turn-around time, model creation costs, and provides the OEM with an open unecrypted model of the injector.  Contact support@gtisoft.com for more information.

The new example BOSCH_SolenoidInjector_Payri_et_al, released in 7.4 build 3, illustrates the principles of common rail fuel injection and how to build a detailed model in GT-SUITE.  In particular, the Bosch CRI2-16 injector is built using data from a geometry characterization carried out by CMT-Motores Termicos1; a cross-section of the included CAD model is shown below.  GT-SUITE’s multiphysics modelling capabilities allow for simulation of each domain involved in the fuel injector: unsteady compressible flow, multibody dynamics, and electromagnetics.  The result is a highly accurate prediction of injected mass and the injection rate shape across the injector’s operating range; the model’s average R-squared to the injection rate shape is 0.923. 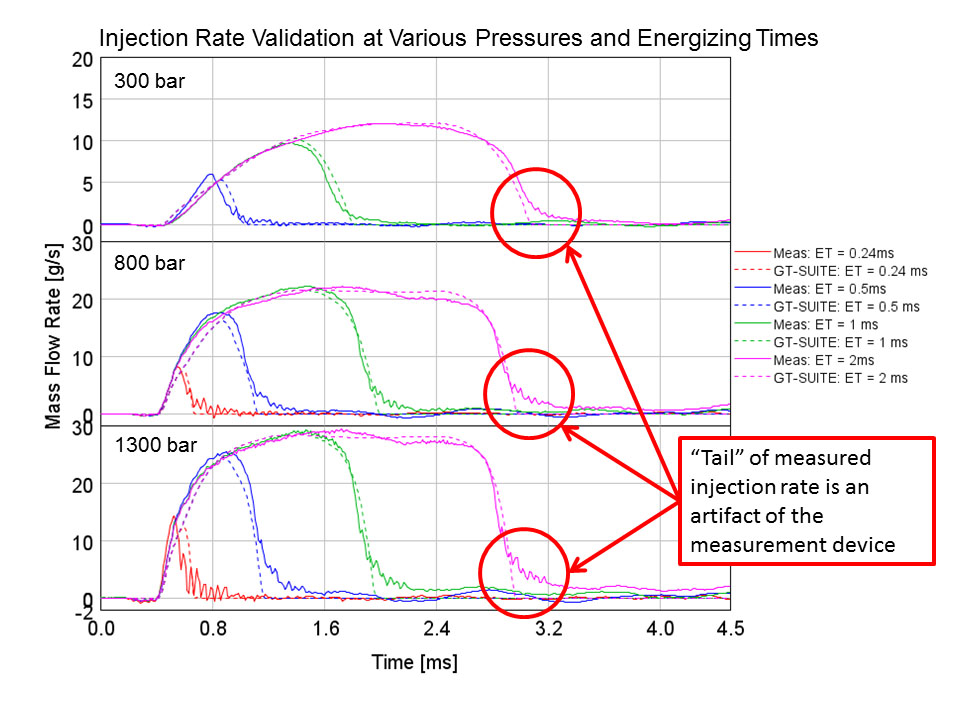