An activated carbon canister is used to capture hydrocarbon vapor emissions from the fuel tank as part of an evaporative emission control system (EVAP). When the engine is running these stored hydrocarbons can be purged by opening a valve to the intake system and reversing the flow through the carbon canister allowing the engine to consume the hydrocarbon vapors by combustion.   With LEV III evaporative emissions standards calling for zero evaporative emission losses by 2022, and with the increasing complexity of turbocharged GDI engines, there is increasing interest in optimizing the carbon canister size for hydrocarbon storage, and optimizing the hydrocarbon purge control strategy. For example when to purge during a drive cycle, where to purge (intake manifold under vacuum conditions or upstream of compressor during boosted conditions), and how a purge event affects engine performance and emissions. 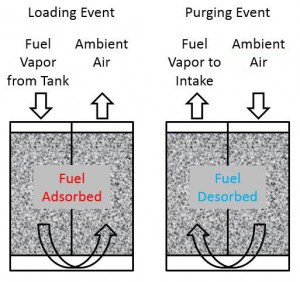 There are some recent additions to the software that have made modeling this application possible. These include adding axial species diffusion to the implicit flow solver for modeling the diffusion from a fuel tank or boundary environment to the carbon canister when there is no flow in order to simulate loading during a diurnal standard test cycle. Another addition was adding the increased thermal mass when the fuel vapor is stored, which can increase the thermal mass of the device significantly, in one realistic test case by as much as 33%. Future developments will include a detailed fuel tank model with fuel vaporization, and improved treatment of the porous media geometry for accurate prediction of the pressure drop of the carbon packed bed in the canister.

In addition to the carbon canister, GT-SUITE contains advanced solvers and components to model the entire EVAP system. Gas dynamics are accurately captured by the Navier-Stokes solver. Valves, such as the purge control valve, can be modeled in various levels of detail, including the option to predict the valve motion and flow rate based on valve geometry, mass, and solenoid forces.