With the increasing demands for fuel-efficient and low-to zero-emissions technologies in the automotive industry, renewable hydrogen fuel is regarded as a promising energy storage form for vehicles. Pure hydrogen combustion emits no greenhouse gas CO2, and noble gases can eliminate environmental pollutants such as NOx by replacing nitrogen. As a result, hydrogen combustion in a noble gas is expected to eliminate both carbon emissions and other pollutant emissions.
Additionally, the higher ratio of specific heats, can increase the theoretical thermal efficiency of an Otto cycle, k = Cp/Cv, as  can be determined from the equation below:

For which CR is the compression ratio. 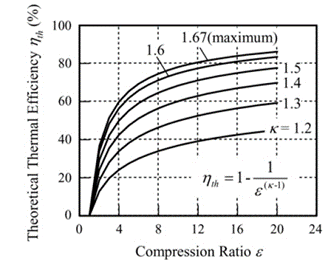 To demonstrate the possibility that GT-SUITE can model a closed-cycle argon-hydrogen engine, Gamma Technologies has built and included a model of such a system within the recently released v2022 build 1. In the example model ‘Ar-H2_ClosedCycle_Engine’, several advanced modeling concepts are applied, including condensation of combustion products, removal of water from the system and a semi-predictive condenser. Argon is recirculated in the system and oxygen is supplied via an injector object; hydrogen, as the only fuel present in this system, is injected directly into the engine cylinder. Upon the completion of combustion, the exhaust gas passes through the condenser to convert the water vapor to liquid water, which is later removed from the system.

A quite critical aspect for the closed-cycle simulation is to ensure the steady solution, which requires a strict balance of the system mass. Namely, it is required to maintain a balance between the mass entering the system and the mass exiting the system. Otherwise, the constantly changing system mass would prevent simulations from converging on a steady result. Consequently, the oxygen supply and hydrogen injection need to be carefully controlled to maintain the stable simulation. 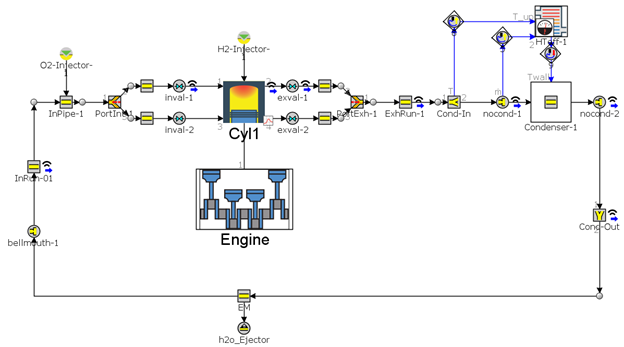 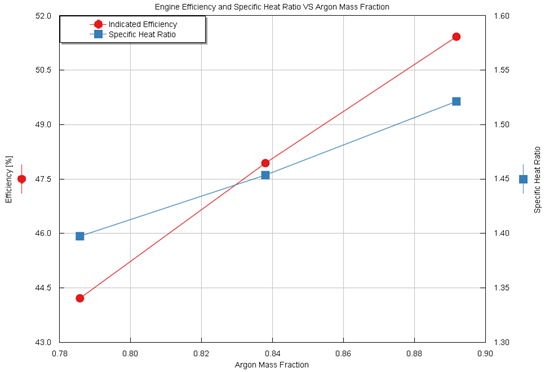