In a previous blog we shared how Gamma Technologies’ GT-SUITE integrates with ThermoAnalytics’ TAITherm to provide a robust solution for vehicle thermal management that included an HVAC simulation system design and cabin climate comfort.

But how accurately can you simulate a vehicle’s cabin thermal comfort using GT-SUITE and TAITherm?

The short answer is…

Pairing GT-SUITE and TAITherm resulted in excellent agreement with measured values of surface temperature for a sedan undergoing a hot pull-down drive test in a climate-controlled wind tunnel.

The long answer is… 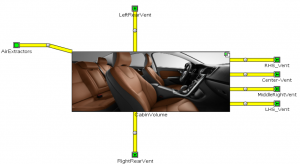 To assess vehicle cabin thermal comfort and simulate the response of a typical sedan, Gamma Technologies and ThermoAnalytics were granted access to transient thermocouple and boundary condition data for a hot pull-down of a 2012 Volvo S60 (see Figure 1: Photo of a Volvo S60 interior). This data set included exterior boundary conditions and internal airflow and temperature measurements. Figure 2: Plot of vehicle speed vs time, a common approach to hot soak analysis.

Although we were not allowed to publish numerical values, our plots still allow for assessment of method accuracy. A comprehensive analysis was performed and presented at the June 2016 HdT conference in Potsdam, Germany. The paper is available to those interested and can be downloaded here.

A summary of our approach

GT-SUITE automatically generated a coarse cubic grid of the vehicle interior and handled both the 3D flow and interacting systems such as the A/C loop and complex engine models. Figure 3: Shows an example GT-SUITE model integrating 1D and 3D analyses in a single simulation of a vehicle. 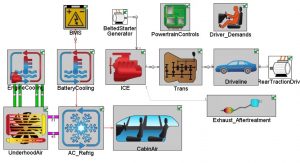 TAITherm computed conduction and surface radiant heat transfer between the solid objects, as well as the environmental boundary loads which included solar effects and transparent glass. The solar load in the measured case was a stationary solar lamp (TAITherm is also capable of modeling more complex moving sun problems). The two codes exchanged data at the surface-fluid interface, with convection values in GT-SUITE delivered to TAITherm. A distribution of those values mapped on the interior can be seen in Figure 4. 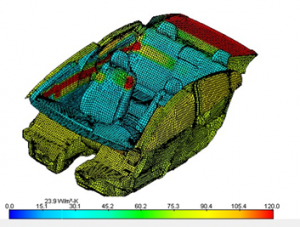 The passenger side had an extra vent in the model S60, and this asymmetry is captured in the convection distribution as it strikes the side of the passenger front seat near the vehicle’s center. A single calibration was made to properly scale the convection coefficients delivered by GT-SUITE. See Figure 5 showing the cubically discretized interior volume and associated TAITherm surface mesh.

In the plots below, the red trace is the measured surface temperature data from the sedan, including the front seats, driver door, windshield and rear foot area. This selection of locations provides a representative “picture” of the distribution over the pull down process.

It should be noted that the precise location of the thermocouple mount points was unknown, so the comparison simulation nodes are a best guess, based on typical industry standards. This uncertainty for the driver’s door had a significant impact, so a plot of a temperature near the front of the door and the rear are included from the simulation. These two plots “bound” the measured solution, though neither appears to have been mounted to a surface with the same thermal mass as the measured location.

The cabin climate and passenger comfort analysis demonstrated that interior surface temperatures all followed a characteristic pull-down curve, but the exterior windshield temperature was convection-driven through the first two-thirds of the test. After the vehicle speed returned to 0 for the final third, it began a normal, exponential drop. 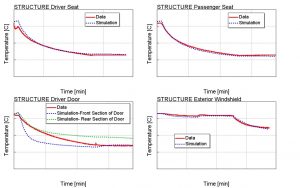