This post provides some background on gerotor pump models in GT-SUITE and GDS and details how the two software tools can complement each other through process integration for powerful optimization runs.

GT-SUITE is an ideal tool for studying the detailed flow and thermodynamic behavior of a variety of pumps and compressors, including gerotor, vane, external gear, reciprocating, swashplate, scroll, screw, and others.  These models can handle either positive or variable displacement, and key output predictions include:

More specifically, gerotor pump models can be created directly from CAD using the GEM3D application, where four basic shapes are specified to define the inner gear, outer gear, inlet volume, and outlet volume.  With this basic template filled, the GEM3D model can be automatically exported to a .gtm model file in GT-ISE where all flow parts are connected and volume, port area profiles, and pressure force areas have been calculated. 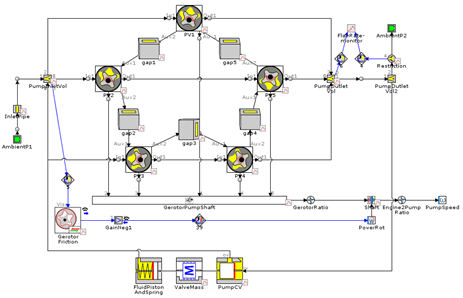 The GDS software provides a user-interface for designing gerotor profiles, designing porting, specifying fluid and material properties, and visually inspecting the gerotor design.  The software performs many detailed physics calculations to predict flows, powers, efficiencies, and pressure waves.  It also has some powerful integration capabilities with GT-SUITE, where GDS can directly create GEM3D (.gem) models of the gerotor geometry while providing the gerotor input profiles to be used in a GT-SUITE pump model.  In addition, a command line version of the software is available that does not require the graphical user interface, and this command line version makes it possible to integrate with GT-SUITE for model-based optimization runs. 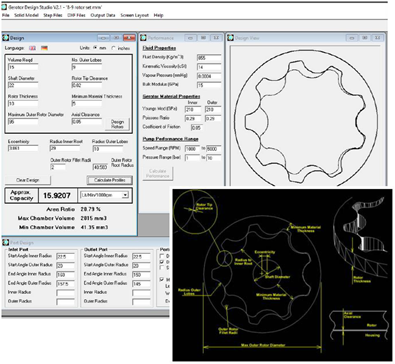 Motivation for Integrating GT-SUITE and GDS

Each software tool has unique advantages that complement the other.  More specifically, design changes made in GDS, such as detailed geometry inputs, will impact the angle-resolved gerotor profiles that the GT-SUITE pump model relies on.  A pump design engineer may want to run optimization or Design of Experiments (DOE) studies to analyze the effects that input geometry variables entered in GDS have on important flow and thermal output variables that are predicted by GT-SUITE.

Integrating GT-SUITE and GDS for Optimization and DOE Studies

Optimization and DOE studies require an automated approach to integration, which, for any combination of input GDS input variables, will first run the GDS model to generate the gerotor pump profiles, and then run a simulation of the GT-SUITE pump model that is configured to use those profiles.

The command line version of GDS becomes very beneficial for this type of automated approach.  It relies on an input text file that provides all the geometry to a GDS gerotor model.  Then an executable called GDS_GTS.exe can be run, which invokes the GDS solver to read the input file, perform its calculations, and generate the gerotor profiles.  A section of a GDS input file is shown here. 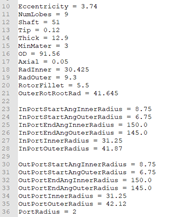 Process integration refers to automated sequencing of a series of processes that might include running CAE simulations, executing scripts or executables, and managing input and output variables that might transfer between processes.  GT-SUITE provides a process integration tool called Process Map which is part of the GT-Automation license.  Process Map models are graphically constructed in GT-ISE and provide organization of parameters, configuration of multiple cases in Case Setup, activation of the GT optimizer, and creation of Designs of Experiments.  The Process Map model for this integration is shown below and consists of five processes that are executed from left to right.

The first process handles transfer of Process Map parameter values to GDS, specifically by modifying the GDS input text file.  This component appears as follows, where four GDS variables are designated for replacement using syntax that targets the specific locations of the text file.  Four port variables are used in this example, and the parameters are used to define the replacement values in the Process Map model’s Case Setup.

The second process is a Python script that executes GDS_GTS.exe to perform the GDS calculations, generate the gerotor profiles, and generate .stp CAD files.  It also performs additional tasks to check for GDS errors.

The third process takes a GEM3D (.gem) gerotor model, which is preconfigured to point to the .stp CAD files that GDS generates, and exports or discretizes it as a 1D GT model file.  A screenshot of a GEM3D gerotor model is shown here.

Finally, the fifth process executes the simulation of the GT-SUITE gerotor model.  The key results of the workflow are output variables (RLTs) from this GT simulation, such as mass flow rate, power consumption, and pressure wave amplitude.  The entire workflow takes about 90 seconds to execute.

The main result of the optimization is a Pareto plot which puts the two objectives on the two axes.  The red points are non-optimal points, while the blue points are Pareto optimal.  The Pareto points are considered to be equally optimal and represent the trade-off between achieving the two objectives; if lower pressure amplitude is desired, then an increase in power consumption must be accepted.  The design engineer therefore must use additional criteria to choose a final design from among the available Pareto points. 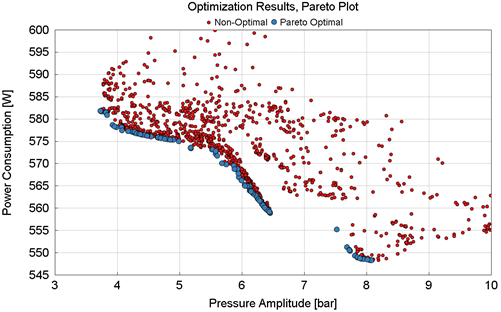 Gamma Technologies is committed to continued research, testing, and improvement of its optimization and data analysis capabilities to provide its users with increased confidence in using these tools for their own projects.  For any questions, support, or further discussion, please reach out to us at support@gtisoft.com.