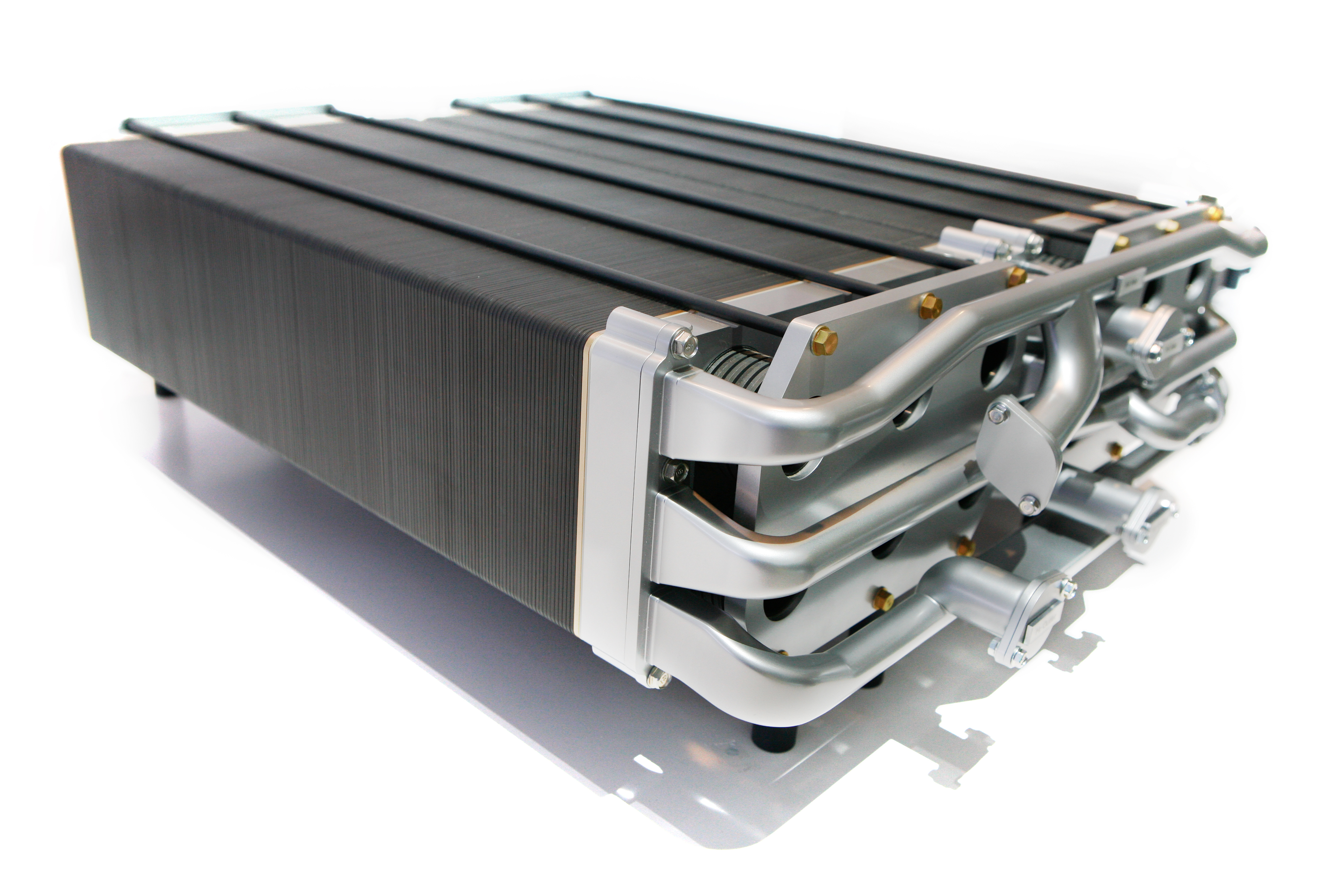 Over twenty years ago, I heard a joke regarding fuel cells that still makes me chuckle: the fuel cell is a technology of the future – and it always will be.  I think I laughed at the time because there were so many obstacles that appeared insurmountable that it seemed like fuel cells would never become a mainstream power source.  I think I am amused now because the person who wrote the joke did not foresee the hard work and development that would go into fuel cells during the coming years would eventually make the joke invalid.  Four major automotive makers (Toyota, Honda, Hyundai and Daimler) have introduced fuel cell powered vehicles in the past few years and all signs point to more car makers doing the same.

The fuel cell appears to be on track to becoming a mainstream power generation device for automotive applications.  It is an attractive option because it has a relatively high efficiency and because the overall emissions from the source to the wheel can be zero when fueled by hydrogen created from a renewable resource such as wind or solar power.

Foreseeing that this power source has potential to become a significant option for the automotive industry, Gamma Technologies (GT) added the ability to model a fuel cell in GT-SUITE in 2004 and we’ve continued developing our fuel cell offering in light of the recent increase of usage by the industry.

Still, the challenges of fuel cell modeling are new to many engineers, so I want to explain some of the considerations taken in fuel cell design and demonstrate how GT-SUITE is the ideal tool for addressing these challenges.

When simulating fuel cells, one challenge is modeling the gas and delivery systems to select the optimal size for compressors, heat exchangers, and evaporators while minimizing pressure losses and keeping the gases entering the stack at the right temperature (around 100 degrees Celsius) and humidity (near 100%).

Many modelers of fuel cells are turning to GT-SUITE to simulate and design the fuel and gas delivery systems that are needed to provide the gas exchange to and from the fuel cell stack. This choice has been strongly motivated by GT-SUITE’s position as the premier software for 1-D flow solutions in the automotive industry.  As a result of this interest, GT has invested into improving the capabilities even further.

In v2018, GT included with each installation a compound template that combined the existing fuel cell template with control components, injectors and ejectors to model the transfer of hydrogen fuel from the anode (fuel side in a PEM) side of the stack to the cathode (air side in PEM) and the resulting formation of water. This development gives the modeler an opportunity to more accurately simulate the overall fuel and air system by including the effects of the reduced mass of hydrogen on the fuel side and the additional mass and different properties of the gas on the air side.

To continue on this path in v2019, a new template for the fuel cell stack was developed that not only handles the mass transfer and transformation of reactants to products, but also connects directly to an electrical circuit in a GT model, enabling one to simulate the interactions between the fuel cell and the rest of the propulsion system.

This template gives controls engineers a complete plant model that can be used to verify and validate their algorithms to control humidification, as well as fuel rate and air flow rates into the stack. This helps to maintain optimal operation of the entire system including state-of-charge of the battery during a drive cycle simulation.

Defining the Polarization Curve of the Fuel Cell Stack

As part of creating a good model of a fuel cell system, it’s also important to properly represent the polarization curve of the fuel cell stack.

For those who don’t know, a polarization curve is a curve that defines the relationship between voltage and current density of the fuel cell stack. This relationship impacts the performance of the whole system as it tells you whether you have too much power, if less power is required, etc.

The polarization curve is often entered into a fuel cell stack component as part of a larger system model. Because this integration takes into account key inputs from other systems, it allows engineers to make an accurate evaluation of fuel cell performance.

Another development made in v2019 was the ability to enter the polarization curve of a fuel cell stack into the fuel cell part on the map of GT-SUITE.  In the original fuel cell template, the polarization curve is defined by the composition of the reacting and product gases in the anode and cathode sides of the fuel cell stack, as well as other coefficients that can vary with temperature and/or other factors.  This design offered great flexibility in defining the performance of the stack and in adapting to changing conditions of the incoming gases.

In order to maintain this flexibility, GT decided not only to enable entry of the polarization curve, but to fit this curve to the same equation used in the original template.  This design provides an easy way to enter a measured polarization curve and its corresponding reference conditions, and it allows the resulting model to increase or decrease the voltage accordingly depending on changes in the inlet conditions, such as pressure and temperature.  An example of the fit that results from a sampled curve is shown below.

Hydrogen has a number of disadvantages as a fuel for automotive transportation: it has a relatively lower power density compared to hydrocarbons, it has an amazing ability to leak through the smallest of gaps between parts and it has the perception of being dangerously explosive (though this point is certainly open to debate).  One option to combat these challenges is to use a reformer to generate hydrogen fuel from a hydrocarbon on board the vehicle itself.

Reformers are devices that use catalytic chemistry to convert one or more substances into other substances.  It just so happens that GT-SUITE developed this fundamental capability many years ago for modeling aftertreatment devices, such as three-way catalysts (TWC), deoxidation catalysts (DOC), lean NOx traps (LNT) and other components with three-lettered acronyms.

GT chose to provide a flexible method of defining the chemical mechanisms to allow the user to enter the reactions and rate equations like one would in a spreadsheet.  This flexible method enables GT-SUITE users to add a reformer without customers having to wait for GT to add new capabilities to the code.  One could say the feature is already there, but it is hiding in plain sight.

GT developed an example that demonstrates a reforming process including equations for the typical mechanisms used in this process.  Please feel free to contact us to request a copy of the reformer example or to discuss how you would like to use GT-SUITE for your project.

The attractive features of a fuel cell, such as quick ‘recharge’ times, zero emissions and more certain ranges in extreme temperatures make it a viable option as a primary power source or a range extender for electric vehicles.  Of course, as engineers, we need to analyze the systems we are designing or even just considering during the advanced development stage in order to make good decisions and recommendations.  At GT, we’re committed to making GT-SUITE the ideal tool to empower engineers to make those good decisions.

Please contact us if you are interested in using GT-SUITE for fuel cell system or other modeling needs.