Over 600 attend the 17th Annual European and US User Conferences

2013 was another record year in terms of attendance at the worldwide GT-SUITE User Conferences, and we would like to take this opportunity to thank all that attended, and pass along a final, special thanks to the over 60 engineers who presented results of their GT-SUITE based work at these conferences. All told, 2013 saw approximately 950 GT-SUITE users attend eight GT-SUITE conferences in eight different countries, and four continents.

The 2013 GT-SUITE European Conference was held on October 21, 2013, at the Steigenberger Airport Hotel in Frankfurt, Germany.  This 17th edition of the conference drew a crowd of 310, and including the first time Italian and French User Conferences, held earlier this year, there were close to 450 attendees of a GT-SUITE conference in Europe this year. The 2013 US GT-SUITE Conference, held in Birmingham, Michigan on November 4, was again a huge success, attended by a record 205 participants. 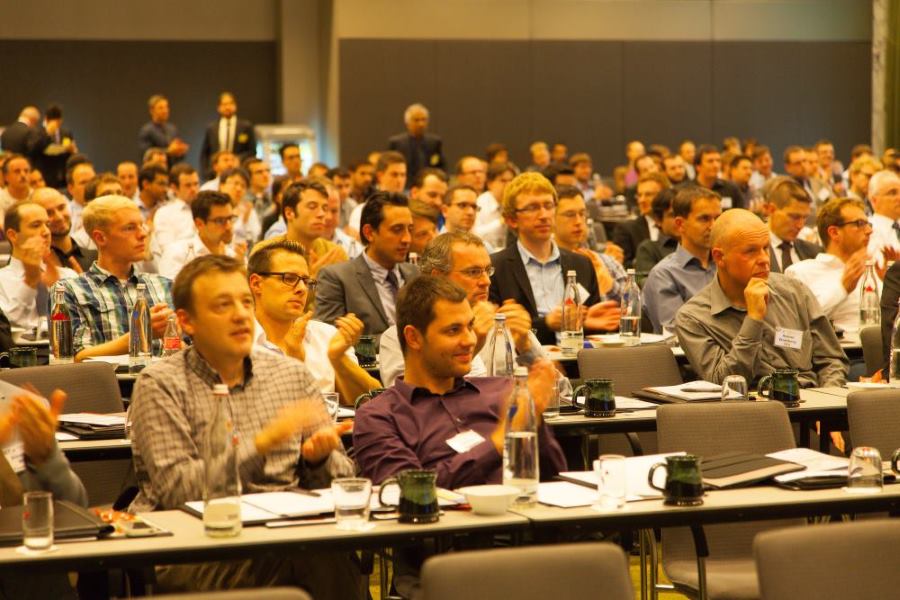 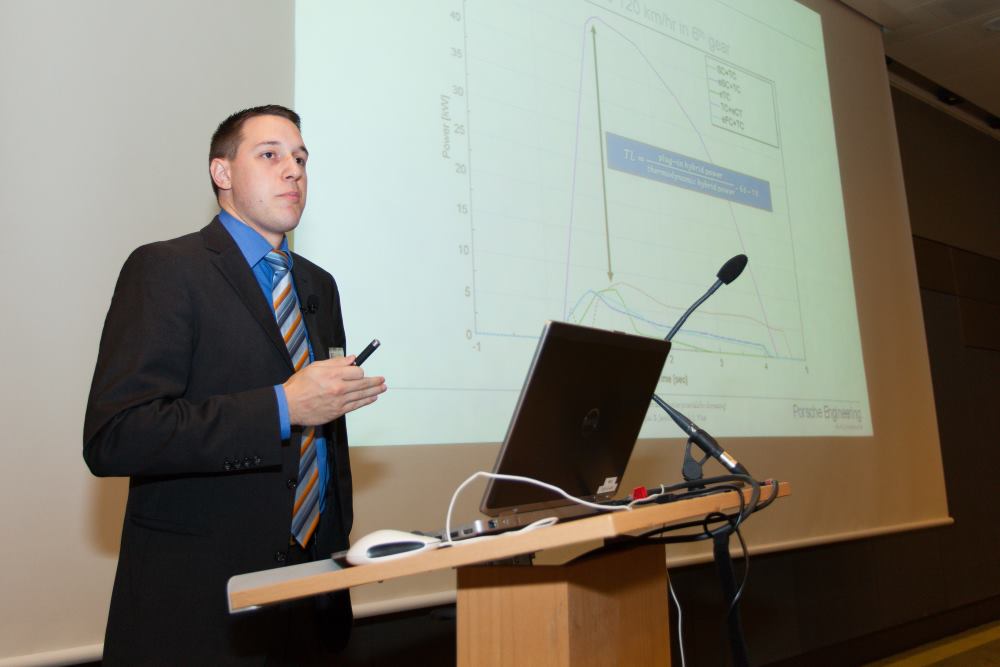 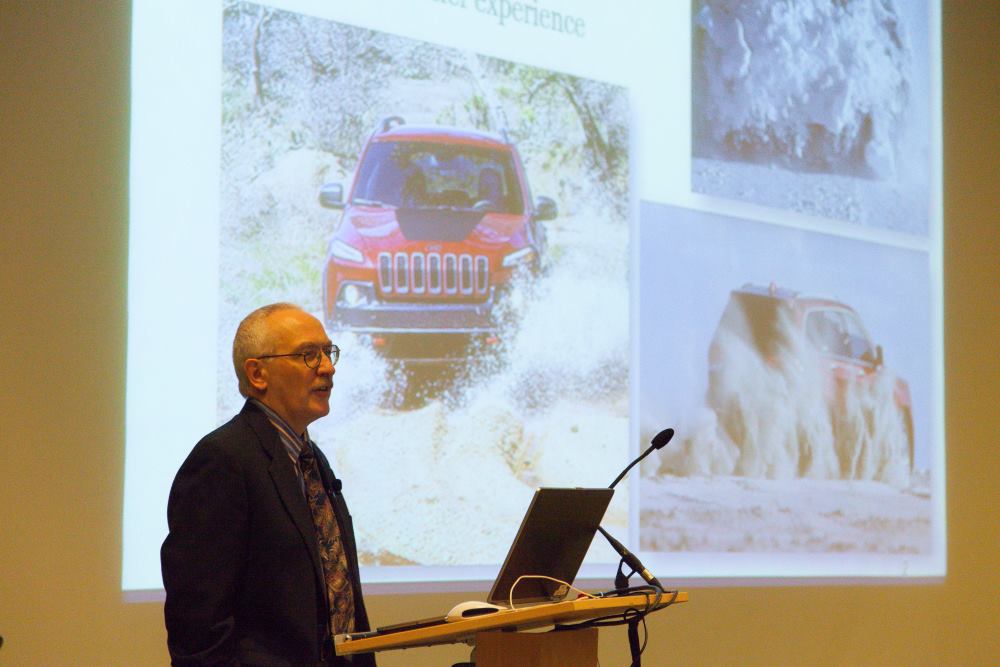 Dr. Bill Resh of Chrysler Presenting on GT-SUITE as a VTM Modeling Platform 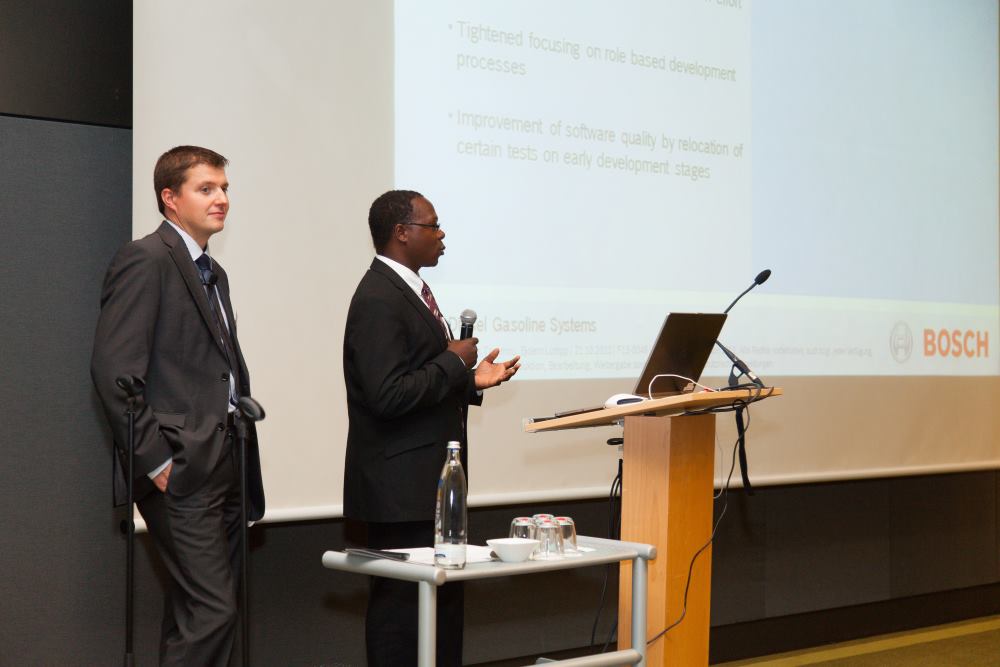 During lunch and the intermediate breaks, demonstrations were given in a dedicated room, in which GTI presented many of the new features that were recently released in GT-SUITE V7.4.  This year, the number of the demo booths was increased to eight, highlighting GT-SUITE in the areas of vehicle thermal management, combustion,  aftertreatment, 3D preprocessing tools GT-SpaceClaim and GEM3D, vehicle and transmission, Fast Running Models (FRM’s), SiL/HiL, and injection and lubrication modeling.  GTI technical partner IPG provided their CarMaker vehicle simulator for the breaks, which was much fun for many who attempted (but sadly, failed) to navigate the test track successfully! 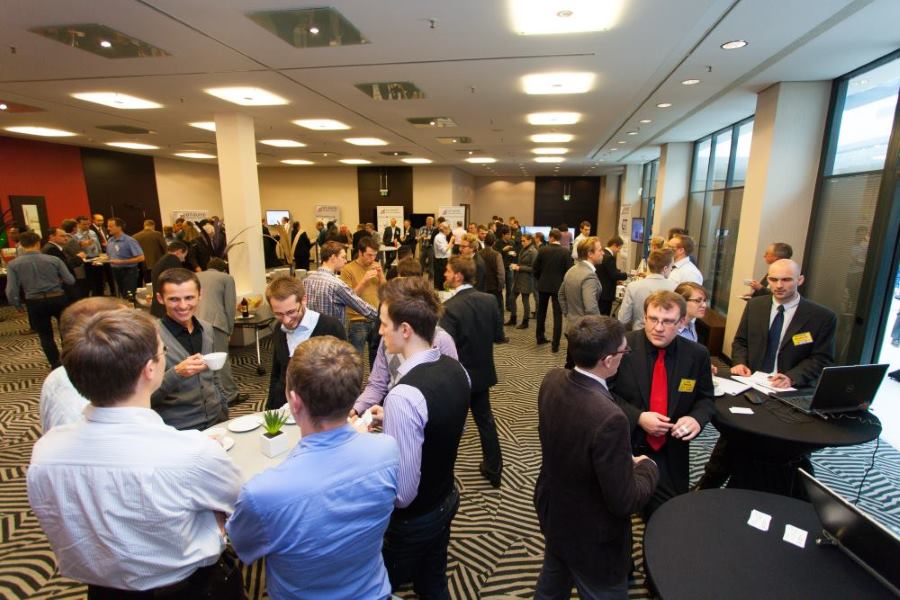 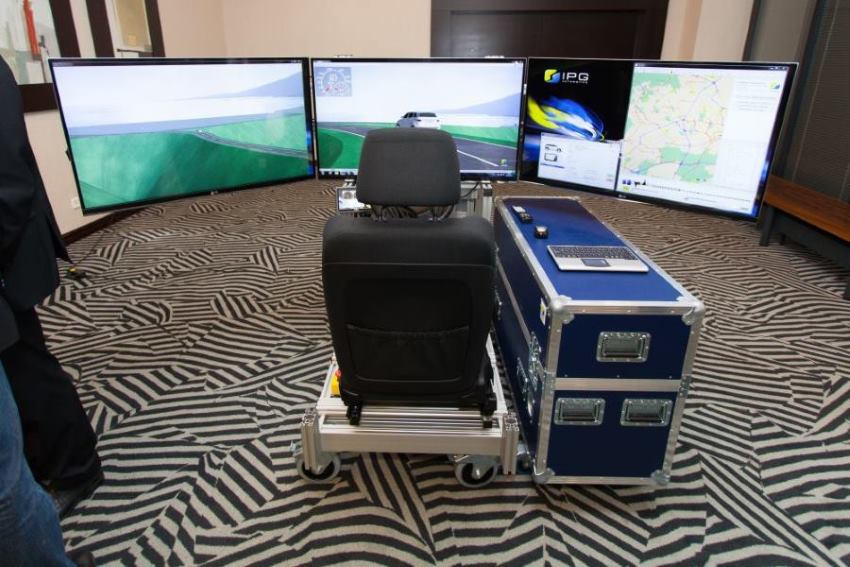 Much Fun was had with the IPG CarMaker Vehicle Simulator

This year’s conference featured our first University Science Corner, where four leading European universities displayed their GT-SUITE based work for all to observe.  Representatives from the TU Braunschweig, TU Freiburg, Politecnico di Torino, and CVUT Prague participated in this event, which was much appreciated by the conference attendees.  TU Braunschweig won a free GT-SUITE upgrade for their winning contribution, a portion of which is shown below. 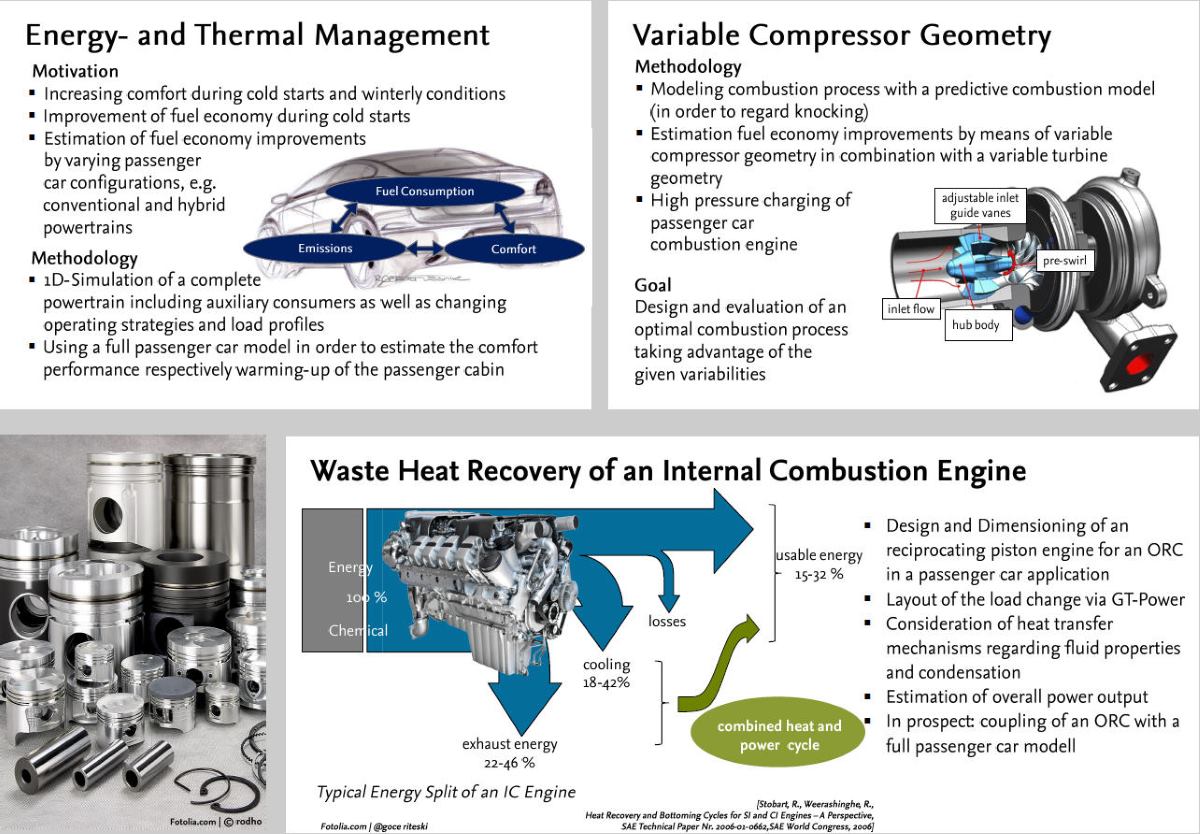 At the end of the long conference day, most attendees joined us for a new tradition which was started in 2012; the post-conference beer break.  This provided a fun and relaxing time for all to unwind following the conference activities, and a chance for old friends to reconnect, as well as a nice opportunity to establish new friendships. 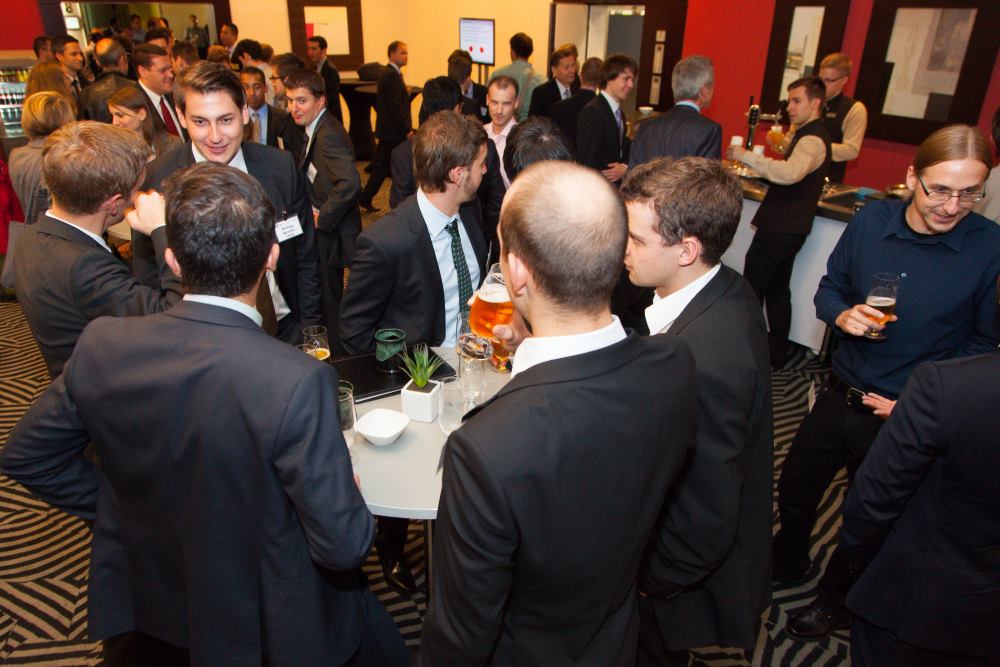 On the Monday evening following the conference and Beer Break, GTI hosted a dinner event that was attended by the majority of the attendees who were staying for subsequent trainings and seminars.  Over 150 attended this dinner, enjoying the food, drink, and atmosphere of the interesting and historic VINUM Restaurant in Frankfurt

Post-Conference Dinner at the VIMUN Restaurant in Frankfurt

On the days following the User Conference, GTI conducted 17 training and seminar events, which were attended by over 200 conference attendees.  This year’s seminars were broken into half day events, with different topics in the morning and afternoon, to allow the attendees an opportunity to get a broader overview of multiple topics. 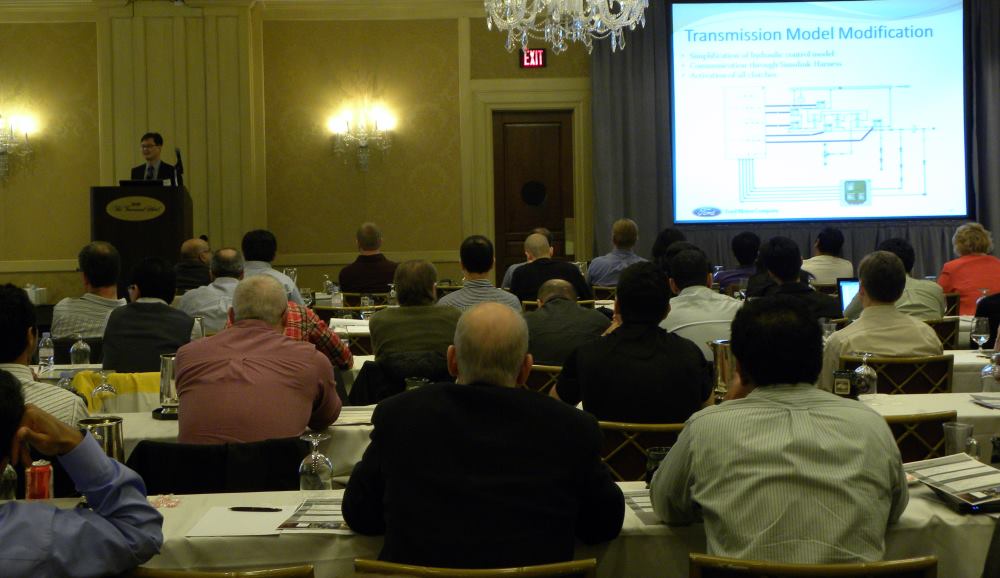 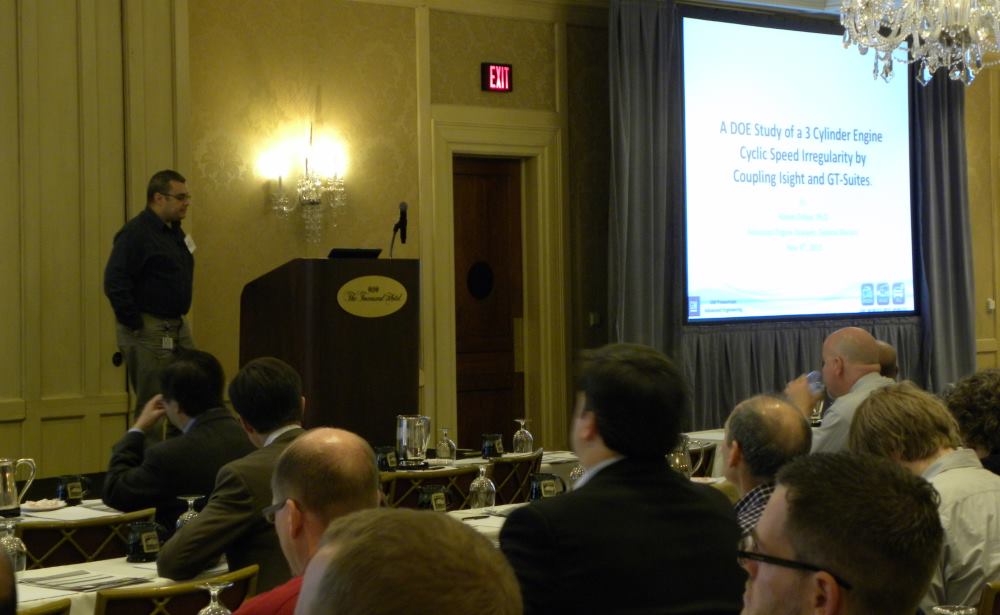 Like the conference in Frankfurt, the U.S. conference included several breaks and time for GT-SUITE users to meet with GTI staff and discuss new features of V7.4.0. 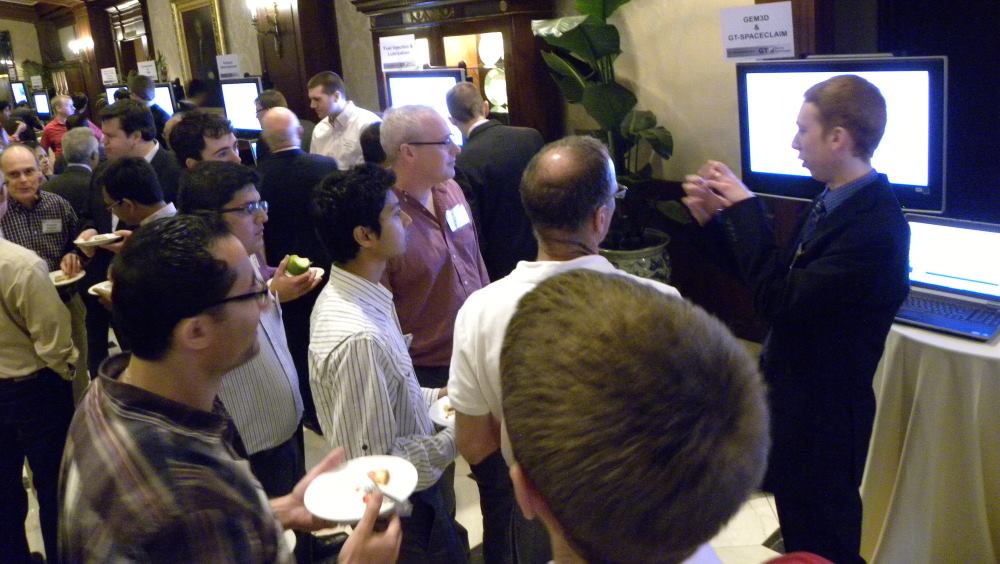 Users Learning about New Features during a Session Break

Once again, we are so very appreciative to all presenters who contributed to the great success of the 2013 GT Conferences.  Approved (by the presenting company) presentations from the conference can be found on our knowledge base web page, https://www.gtisoft.com/gt-suite/publications/.  To search for this year’s conference presentations, simply filter for year 2013 and source:GT-SUITE Conference Presentations. Please also check out our Conference Photo Album . We are already planning for the 2014 GT User Conferences, which will be held in late October (probably October 20, 2014) in Frankfurt, and early or mid November in Michigan.  We look forward to seeing you all there.